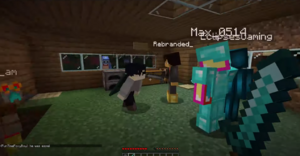 A group of the original players to join the server

On the very first night the server was online a group of players created a town of houses around the oldspawn point. These players called themselves the Spawnies. Several other players did not stay and geared themselves up away from spawn. The next day these players came together and invaded spawn. The Spawnies called these players The Outlanders. The Outlanders would break windows, steal items, ruin farms, and burn houses. They would camp the oldspawn point and continuously kill players as soon as they would spawn. Eventually they left and the Spawnies started to rebuild. 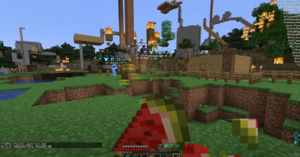 Oldspawn after about a day

As the day went on the Outlanders would return and continue to spawn kill everyone there. This causes most of the Spawnies to leave the server and not return. Some would flee spawn and start new bases. New players would hang around the ruins of oldspawn and continue to build there for another day. They built a platform made out of wood in the sky with a platform going up to it. They fixed up the ruins that were still at spawn and built a nether portal. On March 23, 2020 realMrTacocat after duping TNT returned to oldspawn and completely destroyed the entire thing. After this oldspawn was abandoned.

Retrieved from "https://tqmc.miraheze.org/w/index.php?title=Spawnies&oldid=38"
Cookies help us deliver our services. By using our services, you agree to our use of cookies.