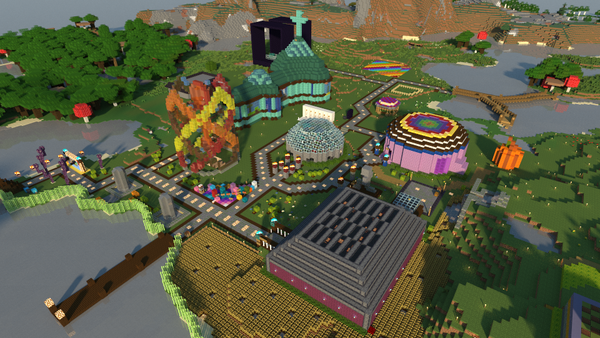 The Rusty Spoon a couple weeks before it was griefed

The Rusty Spoon was a joint Fsociety and LotOC base founded on June 19 2020. It was initially meant to be a temporary base as it was situated fairly close to spawn but it continued being active until it was griefed on November 28 by the Insomniacs. brad6305 and simonxl decided to make a new base fright after the 1.16 update and the donkey dupe was patched. They traveled not too far from spawn and started to setup.

The Rusty Spoon was originally going to be just a place to collect the new nether resources but that never happened and it ended up turning into something much bigger. The base needed a name and neither of the two could come up with one. So brad6305 asked a person named ezM3at in a discord voice chat with what they should name it. He said "Call it the rusty spoon" because earlier in the night there was a conversation in the discord call about the salad fingers videos on YouTube. So from that brad6305 and simonxl named the base and came up with plans to build a giant rusty spoon and map art of salad fingers. There was a wooden shovel named "The Rusty Spoon" in an item frame on the base member beard. Below that was a sign that read "Salad Fingers would be proud". The same day the base was founded the square house made out of crimson planks was built and used as the initial shelter. brad6305 built a obsiaian ƒ in the sky. simonxl turned the ƒ into a giant sign in the sky that said "SALAD ƒINGERS". Later on the giant spoon was built near the front of the base and more buildings came up. The salad fingers map art was inspired by the base and was built at a separate undisclosed location. More players started to join the base including RyanHedrick, Magicalnam, randsum, Gmd213, and seebzy. RyanHedrick built a house near the back of the base with a bridge leading to it. Magicalnam built a tree house on the edge of the base. Gmd213 built a small house that he never got to finish. Seebzy built a blimp over the top of the base. Randsum built a house and a town hall. simonxl had built the temple of the spoon, a building made out of prismarine near the center of the base. He also built a Among Us themed village across the water from the front of the base complete with villagers. Not long after that the base was found by OGpop and Terraroid who claim they found it wandering the nether. The base had a nether portal at it so that could have been the mistake that caused its downfall. They blew up the main part of the base. brad6305 logged into a house that was actively being griefed and caught OGpop and Terraroid in the act. OGpop was on an alt account named NotKing_Vinegar. They retreated when they saw brad6305. This was the prelude to Operation Lex Talionis, an effort get revenge. 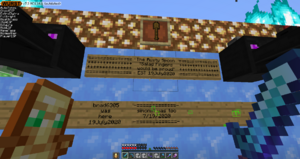 The Rusty Spoon Member Board 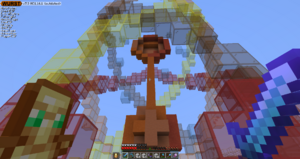 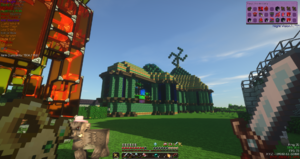 simonxl's temple of the spoon
Retrieved from "https://tqmc.miraheze.org/w/index.php?title=The_Rusty_Spoon&oldid=2163"
Cookies help us deliver our services. By using our services, you agree to our use of cookies.